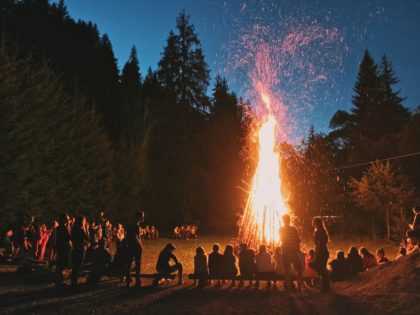 Occurring on June 21st or 22nd, this holiday is also known as Midsummer or St John’s Night and is the Summer Solstice.

This is the opposite of Yule. LITHA is the Longest Day and the shortest night. At this time of year, the Sun God has reached the moment of his greatest strength. Seated on his greenwood throne, he is also lord of the Forests, he is the green man. From this moment forward darkness will increase ever so slightly each day until Yule. To Celebrate this day fires were lit to just to honor the sun on the longest day of the year not just for its light but also in celebration of its magical powers. The smoke from midsummer fires was considered by some to have protective properties, and with this in mind, bonfires were built alongside crops and orchards. The bonfire smoke was thought to protect the orchards from trickster spirits.

Midsummer has long been connected to the fey. Many pagan midsummer celebrations include offerings and acknowledgements of the fey, Oak/Holly king rituals, bonfires, prayers and offerings to solar deities, solar wheels/discs, etc. Some also like to do divination for the year ahead on this auspicious date.