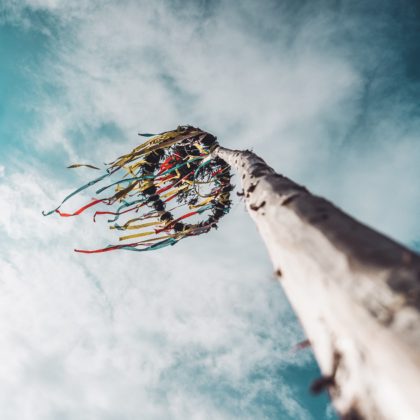 Occurring on April 30th-May 1st, this holiday is known as May Eve or May Day. A fire ceremony is held to signify the midpoint between Spring and Summer

This is the festival opposite of Samhain. The veil between the realms is thin at this time too. Often the focus is less on ancestors and more on nature spirits. BELTANE was historically an Irish celebration/fire festival that later spread throughout the British isles. It’s likely that the name comes from the Irish word bel, meaning “bright” or fortunate and the Gaelic word “teine,” which means fire.

These celebrations often involved big bonfires and using fire/smoke for protection. In some areas farmers would pass their livestock through the smoke of the fires to protect them from evil. Beltane is largely derived from the English May Day celebrations from which we get traditions such as maypoles, may queens, jack-in-the-green, green men, etc. Traditional May Day celebrations involved fun, frivolity, games to celebrate the start of the English summer. Blooming flowers were often used as seasonal decorations. Beltane is a celebration of life and fertility. Celebrations sometimes include an depictions of the young Horned God courting the maiden Goddess. Maypoles, dancing, and bonfires are also a part of many rituals.