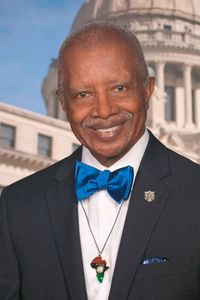 Mississippi Senator Hillman Frazier will be our guest speaker on Sunday February 27 to discuss critical race theory and other legislative issues.

Senator Hillman Terome Frazier has served in the Mississippi Legislature for 43 years. He currently represents Senate District 27 in Hinds County. He is Chairman of the Senate Interstate and Federal Cooperation Committee and Vice Chairman of the Labor Committee. He is also a member of the Appropriations, Constitution, Elections, Investigate State Offices, Judiciary Division A, Public Health and Welfare, Rules, and the Universities and Colleges Committees. Prior to his Senate Service in 1993, he was a member of the Mississippi House of Representatives for 13 years.

A Jackson native, Senator Frazier and his wife, Jean Maria still reside in Jackson. They have a son Julian Frazier, daughter-in-law Erica, grandson Kristopher Julian, and granddaughter Kawaii Joi as well as a daughter Gabrielle Jones and son-in-law Jimmy Jones.

This service will be delivered live via Zoom (online only).