The Unitarian Universalist Church of Jackson was founded as the Unitarian Fellowship of Jackson by seven families, including local physicians and professors teaching at Millsaps College on September 7, 1951. The fellowship began as a lay-led fellowship focused on religious freedom meeting on alternating Sundays in several downtown hotels, including the King Edward. From this modest but determined group, we have evolved over the years to become a diverse and thriving community — just like the city we serve.

In the 1950s, the Fellowship had expanded its membership and was renamed as First Unitarian Church of Jackson. The congregation secured its first permanent facility on Ellis Avenue in 1958.

During the early 1960s, the congregation increased its involvement in the civil rights struggles eventually integrating its membership in 1963 with guidance from the newly formed Unitarian Universalist Association (UUA)1 who also helped settle the Rev. Donald Thompson as minister. He continued the church’s involvement in civil rights and participated with the integrated Mississippi Council on Human Relations, a group that had caught the attention of white supremacist. The year 1965 brought great change. On a positive note, Florence Newman, a founding member, worked with one of the first integrated head start program in Mississippi; 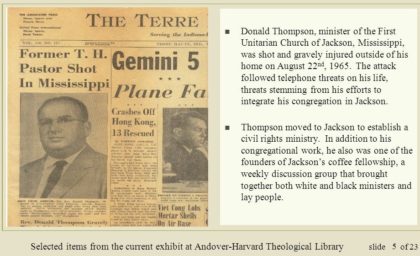 however, Rev. Thompson was shot and severely injured by those wishing to end his and the congregation’s efforts in civil rights. Despite wishing to stay on, for the safety of his family, he left after being released from the hospital.

Despite declines in membership, a dedicated core of members remained committed to civil rights retaining “an exhibition of openness: openness to out-of-state civil rights volunteers, openness to housing the Council on Human Relations, openness in membership policy when other Jackson churches were calling in the police to enforce racially exclusionary attendance policies, openness to ‘radical’ members like Bill Higgs (an attorney handling civil rights cases until he too was driven from the state), and so on.”2 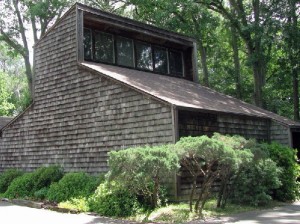 At the beginning of the 1970s, the church, renamed as the Unitarian Universalist Church of Jackson (UUCJ), led by the Rev. Gordon Gibson, decided to move to North State Street, where a two-story home was torn down and a new sanctuary was built. The adjoining home was converted into our religious education space and dedicated in the name of founding members Harry and Florence Newman. 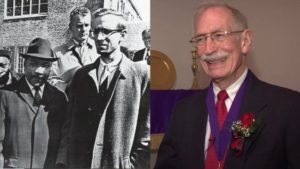 The Rev. Gibson served the congregation again in the late 1970s until the mid-1980s; during his tenure the church grew in membership, serving many families and lively children and youth groups, as well as became active in supporting the women’s and gay liberation movements.

In 1980, tragedy struck the congregation with the untimely death of Board President John Kratochvil in a car accident. A memorial garden was named in his honor. In the late 1980s, the congregation was led by the Rev. Shirley Ranck, writer of the Cakes for the Queen of Heaven, a celebrated curriculum re-introducing a new generation to Goddess and Pagan studies. The congregation embraced a growing understanding of equity and diversity.

Throughout the 1990s until her retirement, the congregation was served by Joan Jebsen, the only UU Chaplin in the U.S. who also worked at the VA Hospital. As she was unique, she worked with the UUA to create a course of study to attain this distinction! The congregation, still strongly connected with its humanist roots, grew more theologically diverse with the addition of more spiritual and neo-pagan members.

In the 2000s, the congregation underwent a transformation under the guidance of a series of professional consulting ministers, including the Rev. Barbara Jamestone, Rev. Marti Keller, Rev. Roy Reynolds, Rev. Jacqueline Luck, and Rev. Fred Hammond, who helped the congregation establish a new covenantal understanding of its relationship among its members and sister congregations. 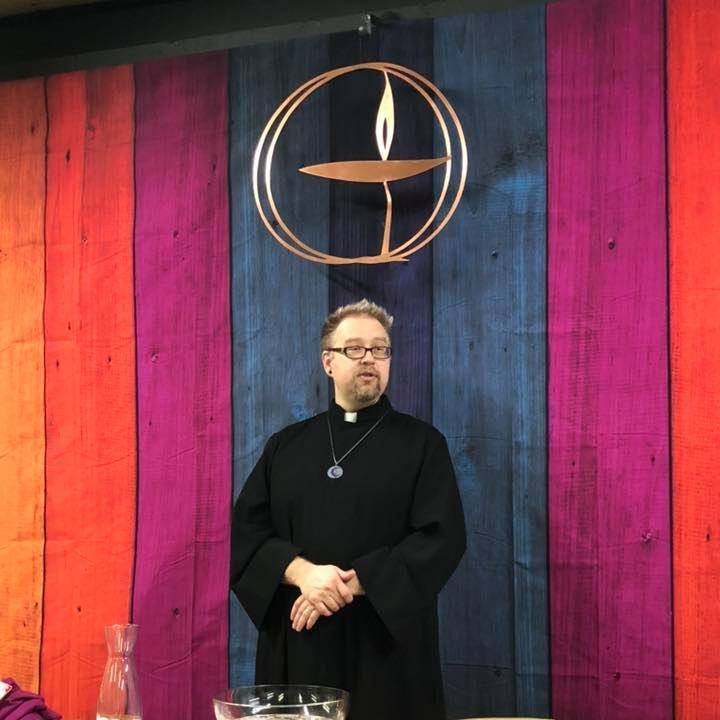 In the 2010s, the congregation was led by home-grown minister Rev. Justin McCreary. The congregation focused on expanding its impact in the community to promote justice and compassion within the Jackson metro and beyond. Two congregational awards were created in honor of long-time members to recognize our members and friends who, likewise, serve the church and congregation. The first was the Shenefelt award, named for Ray and Dary Shenefelt, recognizing those who demonstrate ongoing leadership and service to the congregation. The second was the FLAME, named for Fran Leber, recognizing those who demonstrate Unitarian Universalist values in the larger community. 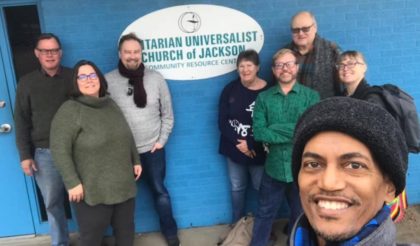 In 2018 member and leader Brian Heffner assisted the congregation to secure the donation of the building and land at our current location on North West Street from the Excell Bottling Company. After his untimely death, our current meeting space, Heffner Hall, was named in his honor. The fall of 2019 brought new energy as the congregation both permanently moved to our new facilities and ordained Rev. Justin McCreary; however, in 2020, like most Unitarian Universalist congregations in the country, the church transitioned to virtual-only service delivery in the wake of the COVID-19 pandemic. Despite these challenges, the congregation quickly adapted to holding weekly online services and added a mid-week small group gathering, Vespers, which attracts attendees from across the state. Due to the switch to virtual services, the congregation was able to begin holding joint services with sister UU congregations across Mississippi and even across the country.

In April 2022, the congregation returned to in-person services. Currently, services and meetings are held using a hybrid model of in-person and virtual gatherings, when possible. Now rebranded as UUJXN, the congregation remains committed to religious freedom and seeking truth, with the teachings of diverse wisdom traditions and individual experiences as a guide. UUJXN members are active in social justice issues of our times–siding with love against oppression and privilege and aligning with the marginalized in the spirit of beloved community to affect transformational change in the world.

1   The American Unitarian Association and the Universalist Church of America merged in 1961 forming the UUA.